Cisco Express Forwarding (CEF) the technology which has been invented by Cisco   omitted layer 3 in order to accelerate packets switching. It has increased significantly the efficiency and speed of packets forwarding, but there was a problem because CEF is Cisco proprietary and has worked only with Cisco devices. Then  MPLS has been invented as an expansion of CEF and as an open standard solution.

In both routing protocols OSPF and EIGRP route summarization and default route propagation are crucial, especially if you have complex network with a lot of prefixes. Properly implemented summarization can save a lot of router resources. Let’s check how to implement both features and what is “mystery” null0 interface involved in summarization.

The traffic control systems, besides a security function realize the following functions: traffic filtering, bandwidth limitation, collecting information about traffic characteristic. Each of mentioned device in the title, perform similar task but work in different way. Deployment one of them depends on network size, efficiency, utilized solutions (i.e remote access). They may work on different OSI layers and deal better or worse with different threats.

Both OSI model and TCP/IP stack (they roles partly overlap themselves)  describe standards and framework of network communication. If they didn’t exist communication between network appliances of different vendors wouldn’t be possible. On the other words, 7 Layers of OSI model enable protocols being visible to each other. But what exactly those protocols and layers are? What exactly happens with information during receiving and how it  runs on particular network layers ? How information is being changed from electric impulse to the usable form ?

Enhanced Interior Gateway Routing Protocol (EIGRP) is considered deprecated routing protocol. In my opinion unfairly. Despite  EIGRP is distance vector protocol (or rather hybrid protocol) is still being utilized in small and medium networks. Reliability and efficiency in connection with simplicity of deployment  make EIGRP still worth of considering routing protocol, especially, that has DUAL algorithm . 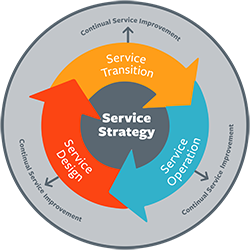 ITIL has been invented to facilitate management of IT services. Regardless what department or environment you work for, whether it is small helpdesk, game designing company or even hospital, because ITIL is versatile and universal. Successfully deployed ITIL rules and best practices will organize and improve work and efficiency in your company.

Sooner or later every expanding network has to be divided onto broadcast domains. There are a few reasons why it should have been done, for example to separate broadcast storms, to sort out logical networks accordingly with employees functions or in order to implement higher level of security (Vlan access lists). So, how to separate network traffic efficiently, not involving layer 3 and router ports ?